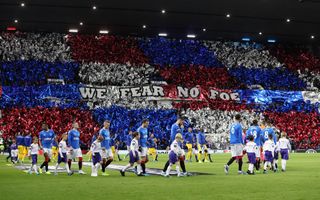 Rangers host Braga in the first leg of their Europa League last-32 showdown at Ibrox on Thursday night.

Here the PA news agency takes a look at the main talking points ahead of the match.

How Steven Gerrard must wish he could hit the reset button and start 2020 all over again. The Rangers boss flew out to Dubai for a winter training camp full of belief his side were primed to make a concerted push for the Ladbrokes Premiership title after their victory at Celtic. But barely six weeks into the new year and they already trail their bitter rivals by 10 points, with their championship dreams hanging by a thread. However, Gerrard’s men have always managed to raise their game in Europe – as demonstrated in displays against Braga’s local neighbours Porto – and the Light Blues boss is hoping a big performance at Ibrox could provide the spark which reignites their stuttering season.

While the Scots have stumbled out of the blocks after the January shutdown, their opponents have quickly hit top gear under new boss Ruben Amorim. Since taking over at Christmas, the former Portugal midfielder has seen his side win six league matches and draw the other. His team also stunned Porto to lift the Taca da Liga last month and Saturday’s win over Benfica was Os Arcebispos’ first triumph at Estadio da Luz in 65 years.

Gerrard branded the state of the Ibrox turf “awful” earlier this month as five games in the space of two and a half weeks, during a period when Glasgow has been battered with torrential rain, took their toll. The muddy mess became so bad Rangers had to postpone Saturday’s league clash with Livingston by 24 hours in order to allow the playing surface time to recover from Storm Dennis. But with concerns continuing, Braga have been asked to carry out their final preparations at the Hummel Training Centre, rather than at the stadium as visiting opponents normally do. Rangers will be hoping they do not end up being the team stuck in the quagmire come the final whistle.

With 14 goals in the competition – including six group-stage strikes – Alfredo Morelos is the top scorer in the Europa League. His 29 goals in all competitions have been vital to Rangers so far this season but Gerrard will be worried that what was once a raging torrent has become something of a trickle in recent weeks. The Colombian has found the net just once in his last seven games and Rangers could do with the 23-year-old rediscovering his touch in front of goal.