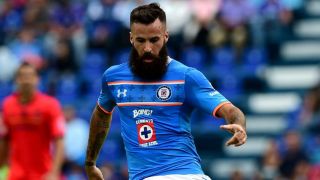 An investigation has been launched after Tenerife midfielder Marc Crosas was pictured having killed a baby endangered shark.

The town council of Santa Cruz, the island's capital and largest city, announced they will probe the incident, which occurred as the team took part in pre-season training exercises on Las Teresitas beach.

Crosas, who was seen holding a slalom pole used for training drills with the angelshark harpooned on the end, apologised for what he described as an "unfortunate incident", adding in a statement: "I accept the consequences and will try to do everything in my power to make amends for the issues caused".

"Disciplinary proceedings will be opened from the Environment section," she said via Twitter.

"Las Teresitas is one of few breeding sites. Apologies for this appalling act are too little."

Tenerife winger Suso Santana, however, said Crosas, a Barcelona youth academy product who joined the club on loan from Cruz Azul this year, did not deserve severe punishment as he had no idea what the species was.

"The treatment of my team-mate Marc Crosas seems unfair to me," he wrote on Twitter. "We can't know all the marine species, much less if they are protected or not."

The common angelshark is a critically endangered species named on the 2015 'Red List report' compiled by the International Union for Conservation of Nature and Natural Resources (IUCN), which reviewed Europe's most threatened marine life.