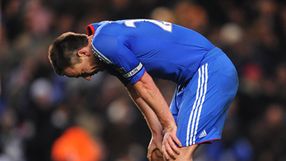 The persistent injury forced the Chelsea skipper to miss the Blues' shock 3-0 home defeat to Sunderland at Stamford Bridge on Sunday, and has also made him pull out of the England squad to face France in a friendly at Wembley on Wednesday.

And with a variety of specialists failing to find the root of the problem, the 29-year-old is concerned that he could be in for a lengthy spell on the sidelines after initially suffering with the problem towards the end of last season.

"It has been manageable up until the last two weeks but when we played Fulham I stretched to win the ball against Clint Dempsey and it got a lot worse," Terry said in the Daily Mail.

"It is at a point where I can't carry on with it. I used to be able to make it through games because the adrenaline gets going and you blank the pain out, but now there really is no decision to make.

"After games I am in agony and not sleeping at all. I used to play with pain at seven out of 10. Now? It's 10 out of 10. I need to take a few weeks rest, see a couple of specialists and solve the problem.

"People are saying it could be my posture, but nobody really knows. Every time I jog or warm up, I don't feel right. It has been that way for a while, but this is different now.

"Other players have recommended guys, and I've seen a couple already, but it is just a question of finding one who can solve the problem.

"Any ideas anybody has had, I've tried them. There are guys in London who can do nerve tests on machines, and guys in Italy who look for problems higher up the body.

"That is where I am at right now, just trying to find out what is wrong."

A prolonged period on the sidelines would be a massive blow to Chelsea boss Carlo Ancelotti, who had to deploy Paulo Ferreira and Branislav Ivanovic as emergency centre-back's against the Black Cats in the Premier League on Sunday.

Ancelotti is also struggling to cover the ongoing absence of midfielder Frank Lampard, while Michael Essien must sit out the next two games having been dismissed against Fulham.