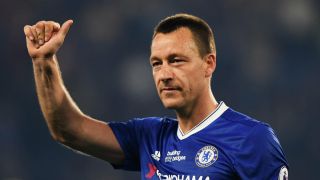 Chelsea captain John Terry has described his heartbreak at bringing an end to his time at the club, saying: "This has been the toughest few weeks of my life."

It was announced last month that Terry would depart Stamford Bridge after more than two decades with the club and his next move remains unclear.

Terry will lift the Premier League trophy following Chelsea's final match of the season at home to Sunderland on Sunday, with Antonio Conte's men having wrapped up the title with a win at West Brom earlier this month.

But despite the joyous scenes that will occur in west London later today, Terry admits the celebrations will be tinged with sadness as he bids farewell to the club with whom he has won five Premier League titles, five FA Cups, three League Cups, the Champions League and the Europa League.

Writing his final programme notes, Terry said: "It is a huge honour for me to become the first player to captain a team to five Premier League titles and I can't wait to go and lift the trophy with Gaz [Gary Cahill] at the end of today's game.

"I will never ever be able to thank you supporters enough for your backing along the way, for picking me up when I was down, or singing my name and making me feel like the best defender in the world. It has meant everything to me.

"Without all of you Chelsea Football Club doesn't exist. So believe me when I say this has been the toughest few weeks of my life.

"I am, and always will be, extremely grateful for your backing, from when I first stepped onto the pitch at Stamford Bridge for my debut in October 1998 right through to today. From the bottom of my heart, thank you.

"Today we can become the first team to win 30 games in a Premier League season and we want to make sure we finish with another victory.

"Then I'll see you at Wembley for the FA Cup final [against Arsenal].

"Let's give it everything we have to make it a Double.

"Come on the Chels!"