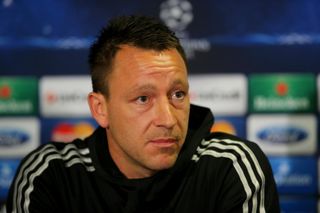 The experienced defender has rediscovered form of old following the return of manager Jose Mourinho to the club in June.

Terry is out of contract at the end of the season but both Mourinho and the 33-year-old have made no secret of a desire for the former England international to play on at Chelsea.

And Terry is now waiting to see whether he can be granted his wish to remain at Stamford Bridge.

"I want to stay here for the rest of my footballing days," insisted the Chelsea captain in the build-up to Wednesday's UEFA Champions League clash with Atletico Madrid.

"It's the club I've been at since 14 and I've been nowhere else.

"We're in talks. We've had big games, so we haven't spoken for a few weeks, but I hope it gets done.

"It's down to the club but I want to stay and I hope something gets sorted out."

Terry has handed Mourinho a huge boost ahead of the second leg of the semi-final clash with Atletico – which is delicately poised at 0-0 – by declaring himself fit after recovering from the ankle injury that forced him to sit out Sunday's victory at Liverpool, a result that kept alive Chelsea's Premier League title hopes.

He said: "On Sunday I went out and trained with the boys who stayed back and it was totally fine. (On Monday) I did a full session and I did again (on Tuesday), touch wood I've had no problems."