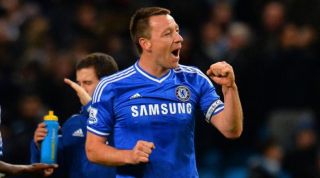 Terry praised Chelsea's work in the close-season - which has seen them sign the likes of Costa, Cesc Fabregas and Filipe Luis - and was pleased to get three points on the board.

"Diego Costa held it up well [against Burnley] and got on the scoresheet which is a great start for him.

"We're hoping to win the Premier League - that's our target this season.

"It's going to be very tough. We've seen some quality play over the weekend from many teams but it was important we picked up three points and now we move on to the next one."

And he is looking forward to working in tandem with Costa and Fabregas as the Stamford Bridge outfit look for their first title since 2010.

"Diego Costa is a striker who can score every time and Cesc Fabregas, who has played in the Premier League before, did very well," Hazard said.

"Diego can score and that is good for me. Now I can concentrate on making passes for him."