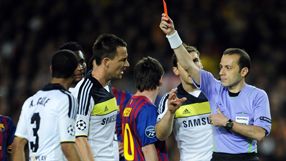 A gallant 2-2 draw against Barcelona in the Nou Camp gave Chelsea a 3-2 aggregate victory and a place in the final for another crack at Europe's most prestigious club trophy after the heartbreaking 2008 loss to Manchester United on a rainy night in Moscow when Terry missed a potentially match-winning penalty.

The influential central defender has always vowed to make up for that shattering experience but an act of folly means he will be a mere cheerleader in Munich next month when Chelsea take on either Bayern Munich or Real Madrid.

His instant red card for a ludicrous knee in the back of Barca striker Alexis Sanchez after 37 minutes, just after Sergio Busquets had put Barca in front and with central defensive partner Gary Cahill off injured, should have been curtains for his side's hopes.

As it was, a steely rearguard action from the 10 Chelsea players left on the pitch spared Terry from again taking the blame for another night of Chelsea heartache.

"On a personal note, of course I'm disappointed but believe me this football club deserves to be in the Champions League final," said Terry, who initially tried to excuse himself but later admitted he deserved a red card.

"We've had a little bit of luck along the way in the competition and long may it continue, but I hope the incident doesn't take away from how well the lads played.

"I've apologised to [the players] and I want to apologise to all the Chelsea fans as well."

Such is Terry's stock at Chelsea, for whom he has made more than 540 appearances, that the fans will not castigate their captain who may have squandered his last chance to play in a second Champions League final.

He has proved many times how well he copes with adversity but this season has tested his mental fortitude to the full.

In October he was accused by Queens Park Rangers defender Anton Ferdinand, brother of England colleague Rio, of racial abuse during a Premier League game.

Terry denies the charge but will go on trial in July and many are questioning his role in England's Euro 2012 squad.

In February he was stripped of the England captaincy by the FA who said the impending trial so close to the tournament in Poland and Ukraine would make it hard for him to hold down a role that brings such responsibility.

It was the second time Terry had been relieved of the England armband, the other occasion coming in 2010 after allegations of an extra-marital affair with the former girlfriend of a fellow England international.

The controversy over the racism allegations also left England without a manager after Fabio Capello apparently quit because he disagreed with the FA's stance on the matter.

Terry's performances on the pitch, despite knee surgery this season and two recent cracked ribs, have stood up well.

Yet, despite his pre-match rallying call for calm heads and discipline in the face of the expected Barcelona onslaught, Terry let himself down in spectacular fashion and will find sympathy for missing the final in short supply.

"At this level of footb