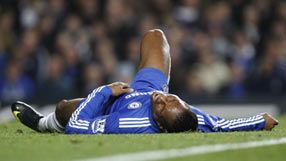 Reports had claimed that the Ivory Coast international had been struggling with a virus, forcing him to miss the Blues' draw at Aston Villa and victory at Spartak Moscow last month.

He was also not fit enough to start Sunday's 2-0 defeat to Liverpool at Anfield, coming on as a half-time substitute but failing to make a telling contribution.

However, blood tests have now confirmed that Drogba contracted malaria.

Drogba is expected to start for the Blues against Fulham at Stamford Bridge on Wednesday night, despite the revelations about the goal-getter's health.

"He had a problem," added Ancelotti. "He lost power and training.

"He lost his condition. He's had treatment and now he's OK. He'll come back immediately in the best condition.

"He suffered, obviously, because he wasn't 100 percent but now, after treatment, he'll be better. He had malaria. He had the tests in the last day, and they showed this kind of virus. Now he's good.

"I gave him a few days off and he went on holiday for a few days, and then he has malaria. But it's over now. He's OK."

Defender Alex (knee) and striker Nicolas Anelka (back) are fitness doubts for Wednesday's match while midfielder Frank Lampard, who has been out injured since August, is expected to return at home to Sunderland on Sunday.