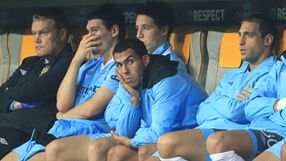 Mancini told reporters that as far as he was concerned Tevez was "finished" and would never play for City again.

Mancini, looking visibly shocked, told a news conference: "I am really disappointed because it is Carlos.

"This can't happen in a top club - to refuse to go in to help his team mates. What I said to Carlos is between me, him and the team.

"But if we want to improve as team Carlos can't play with us. With me, he is finished."

He explained that he asked the Argentine to come on with 35 minutes to play telling him that if he came on they could change the result from their losing 2-0 position.

Mancini said: "He refused to warm up and again refused to go on the pitch. If a player has a lot of money to play for Manchester City... he can't play, never."

Tevez has had an uneasy truce with City since angling for a move away from the club this year, citing family reasons.

He has only played one full match this season, in last week's win over Birmingham City in the League Cup.

He made a nine-minute appearance as a substitute in City's opening Champions League match two weeks ago against Napoli, and has also made two substitute appearances in the Premier League and started one game.