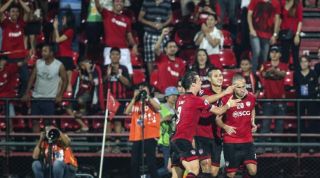 A full round of games was scheduled for the weekend of May 24-25.

However, those matches will now be played at a later date, with a statement from the league highlighting the importance of player safety after the nation's army had imposed martial law.

"The national army on May 22 announced measures to maintain peace throughout the Kingdom and to bring peace back to people of all groups as soon as possible," read the statement.

"The Thai Premier League limited company's view of the situation is not calm and we must ensure the safety of athletes, teams and supporters.

"For the games in the middle of the week on Wednesday May 28, the league will continue to evaluate the situation and inform you again."