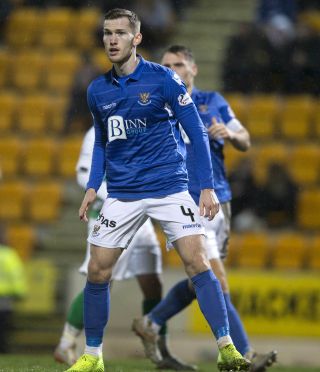 Jamie McCart believes St Johnstone should be wary of a Motherwell side still seeking their first Premiership win of the 2020/21 campaign.

The Steelmen, who finished third last season, are bottom of the table with just two points from six games as domestic football resumes after the international break.

Defender McCart, however, is bracing himself for a tough afternoon at Fir Park on Saturday.

The 23-year-old, who signed for Saints in January from Inverness, said: “You’ve got to be a bit wary, especially when it’s a team like Motherwell.

“They’ve got really good players and a really good manager (Stephen Robinson) and they had a brilliant season last year.

“I think you’ve got to be a wee bit wary because they are due a good result.

“But we’ve just got to try and protect against that and make sure it’s not against us.

“The table doesn’t really reflect how they’ve been playing so and I think that makes them even more dangerous.

“It will be a difficult game, it always is when you go to Fir Park, maybe even more so with their position in the table.

“We have to go there with belief, especially after the performances we’ve had, and aim to win the game.”

Callum Davidson’s side sit in seventh place with seven points from six games and McCart wants to build on the 1-0 win against St Mirren just before the international break.

The former Scotland under-21 player said: “There’s been good and bad this season. We had a good few performances with really bad results.

“The Hibs and Aberdeen results were disappointing, especially the manner of goals we conceded and the timing of them.

“But then again the performances were there and that’s something to build on. And then against St Mirren, we got the both, we got a good performance and a result.

“That was massive for us so it is something we need to try to continue.”