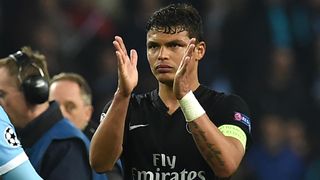 Paris Saint-Germain captain Thiago Silva says his team feel a duty to continue giving their all until the end of the Ligue 1 season.

Laurent Blanc's men have long since wrapped up the title and even set a new points record for the French top flight by moving onto 92 with a 4-0 victory at Gazelec Ajaccio on Saturday.

"We did everything the coach asked, especially as the ground was not good," Thiago Silva told beIN Sports. "We had some difficulties in the first half, but in the second we scored three goals.

"This is what we must do because other teams depend on our results."

On breaking records, the Brazilian defender continued: "One should not think too much about them, otherwise you can make mistakes.

"We will stay focused until the end of the championship and, of course, the cup final."

PSG were without Marco Verratti, who has been ruled out for the rest of the season and Euro 2016 with a groin injury.

"We are sorry for him," commented Thiago Silva. "He must recover and think about next season. He will come back stronger."