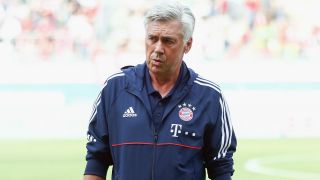 Tianjin Quanjian have denied being interested in appointing Carlo Ancelotti as their head coach.

The Italian was sacked by Bayern Munich last week following a 3-0 Champions League defeat to Paris Saint-Germain and has been linked with a lucrative move to the Chinese Super League.

Former Bayern star Mario Basler claimed in September that Ancelotti had a pre-contract agreement in place with a CSL club, although the 58-year-old rubbished those claims.

Rumours have since emerged that Tianjin have considered replacing Fabio Cannavaro with Ancelotti but the club's billionaire owner, Shu Yuhui, says that is not the case.

When asked about Ancelotti, he told Tianjin TV: "I haven't considered changing our coach, at least for now. [Cannavaro and I] have a good partnership and there is a chemistry between us.

"We didn't play well enough in the last two games and I know how gutted Cannavaro must feel. He even said to his players that a year-and-a-half's effort has been ruined by their weak mentality.

"Cannavaro is working very hard and he really wants the team to get good results so as to bring happiness to our fans.

"I like him very much and I hope with the experience gained at Quanjian, he can continue to improve himself and in the future grow into the best coach in the world."

Ancelotti has already said he does not plan to take over at another club until next season.

Cannavaro's side have lost their last two games, including a 4-1 thrashing in the derby against Tianjin Teda.

They sit fourth in the table after 26 matches, 14 points behind leaders Guangzhou Evergrande Taobao.