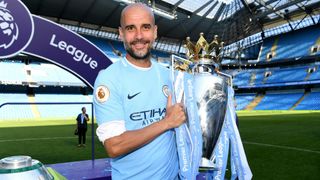 Pep Guardiola says winning the Premier League is sweeter reward for effort than any record Manchester City will attain this season.

The champions received their trophy on Sunday following a 0-0 home draw with Huddersfield Town that moved them 17 points clear of Manchester United.

Though they celebrated with gusto, the failure to beat the stubborn Terriers means City must win both of their remaining matches in order to become the first English top-flight team to reach 100 points in a single season.

Guardiola, however, insists he is satisfied irrespective of records.

"We cannot deny it would be nice, but it's nicer to win the Premier League, that's the most important thing," the 47-year-old said.

"But we spoke about that. These targets help to maintain focus on what we have to do. We tried until the end [during the match], but it was so difficult.

"We have lived this situation - in the game at Huddersfield [in November], against Southampton at home. It was so warm out there and I think the players suffered a little bit, especially in the first half."

Having delivered two trophies in his second season in charge, Guardiola - who fronted the post-match media conference alongside his entire coaching staff - was grateful for the acceptance of City fans.

"I feel so comfortable. I think all of us we feel we are loved. It's nice," he said.

"It's a club without a long tradition in winning titles but I think in six years to win three Premier Leagues is not bad. Really, not bad.

"Of course what satisfies the most is the way we did it."

City's remaining matches are at home to Brighton and Hove Albion in midweek and away to Southampton on Sunday.