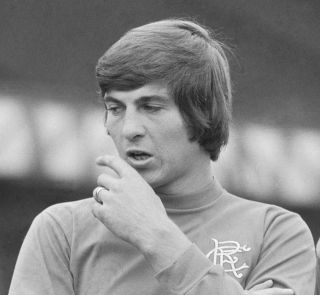 Hampden Park momentarily held its breath during the thrilling 1973 Scottish Cup final when Derek Johnstone’s header smacked the inside of the near post at the Celtic end and bounced once on the line before hitting the other upright.

Almost 123,00 fans watched as Rangers centre-back Tom Forsyth prodded the ball just over the line from six inches, delight and some surprise etched over his face as he raced away in obviously unrehearsed celebration.

Forsyth, signed from Motherwell the previous October, had yet to play in a losing Rangers team and his unlikely goal gave the Govan men a famous 3-2 win over their Old Firm rivals.

Like the present day, Celtic had a firm grip on the domestic scene and had recently clinched their eighth of nine successive league titles.

However, the Gers’ first Scottish Cup final win since 1966 gave encouragement to the Light Blue legions and Forsyth would soon help turn the balance of power back to Govan.

At his Rangers Hall of Fame dinner in 2003, former Motherwell and Scotland defender Forsyth, who has died at the age of 71, recalled his greatest moment.

“Everyone sitting here tonight would love to be in my position, scoring a cup final goal,” he said. “As a kid you dream about it but when it happens you can’t believe it.”

Born in Glasgow in 1949, Forsyth, who had a twin brother Robert, grew up in the rural Lanarkshire village of Stonehouse. His father worked at Paisley Market and had met his future wife when delivering a Clydesdale horse to her home on a farm in south Lanarkshire.

We are deeply saddened to hear of the death of former Motherwell player and assistant manager Tam Forsyth.— Motherwell FC (@MotherwellFC) August 14, 2020

Forsyth’s childhood was dominated by football and he played for local club Stonehouse Violet while working as an apprentice joiner before joining boyhood heroes Motherwell in 1967.

Despite arriving as a centre-half and going on to make his name in that position, he initially played as an inside-forward and netted 17 goals in his breakthrough season as Motherwell won the Second Division.

Forsyth became a favourite at Fir Park until he made the move to Ibrox months after Rangers won the European Cup Winners’ Cup.

He said in 2017: “I don’t think some Motherwell fans ever forgave me for going to Rangers but I just couldn’t turn it down.

“My first game for Rangers was – you’ll never guess –  against Motherwell at Fir Park. I kept giving the ball to Motherwell players.”

His Scotland career began at Motherwell and he went on to win two British Championships with the help of victories in both his appearances against England, in 1976 and 1977, also captaining his country once. He won his 22nd and final cap at the 1978 World Cup.

Three years after his cup-final winner, Scotland fans will recall another memorable moment at the national stadium in a feisty Auld Enemy encounter.

Forsyth was a tough tackler when tough tackling was allowed and was given the nickname ‘Jaws’ but he showed another side to his defensive duties when Mick Channon raced clear with Scotland 2-1 ahead. The telescopic left leg of Forsyth, with perfect timing, hooked the ball away to safety.

Before the game, former Scotland manager Tommy Docherty said that comparing Forsyth with his Manchester United defender Martin Buchan was “like comparing a Clydesdale with a thoroughbred”.

At the end of a season in which Forsyth had just won the first of his two domestic trebles, the Rangers defender later admitted Docherty’s words had driven him on as Scotland clinched their first home internationals trophy in nine years.

After hanging up his boots in 1982 Forsyth was appointed Dunfermline manager but left within a year.

He became assistant to former Ibrox team-mate Tommy McLean at Morton, winning the First Division in 1984, before the Lanarkshire pair moved to Motherwell and immediately repeated the feat.

They enjoyed a successful decade at Fir Park which peaked with the 1991 Scottish Cup triumph before spending a year with Hearts.

Forsyth remained a regular at both Ibrox and Fir Park in his later years – he worked in hospitality for Rangers and was an active member of Motherwell’s former players club.

He will always be remembered as a no-nonsense defender but with a reputation that he believed was exaggerated.

In an interview in the Scotsman in 2017, Forsyth, a keen bowler, golfer and gardener, said: “Yes, I was aggressive. I always wanted to win and to help make that happen I had to take care of my man but I’d like to think I was honest.

“I never deliberately went out to hurt anyone. I don’t think I was dirty; wholehearted I’d call it. I was only ever sent off once in my career and that was unmerited.”

Forsyth is survived by his three children, Karen, Julie and David, from his marriage to Linda, who died last year.