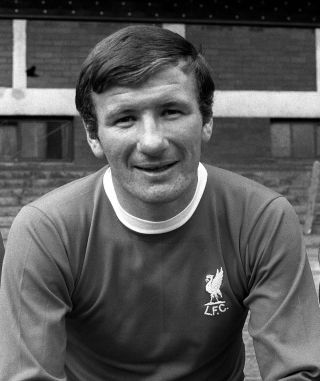 Legend has it that mothers in Liverpool kept a picture of Tommy Smith on the mantelpiece to keep their children away from the fire.

Known as the ‘Anfield Iron’, former Liverpool captain Smith, who helped the Reds to domestic and European success in the 1960s and 1970s, has died aged 74.

A defensive rock of whom manager Bill Shankly once said he “wasn’t born, he was quarried”, Smith spent an 18-year career at Anfield during which he won four league titles and the European Cup in 1977.

Twelve years later he headed a crucial goal to help the Reds lift their first European Cup against Borussia Monchengladbach in Rome.

Born in Liverpool in April 1945, Smith grew up in the shadow of Anfield and joined the club he supported as a schoolboy in 1960, initially on the groundstaff, and then briefly as a centre-forward, before becoming a fearsome defensive enforcer.

Such was his growing reputation that the youngster was the subject of a transfer enquiry from Manchester United boss Matt Busby, quickly dismissed by Shankly.

An uncompromising tackler, Smith would strike fear into the hearts of opponents such as Bobby Charlton and Jimmy Greaves while allowing his gilded team-mates such as Ian St John, Roger Hunt, Kevin Keegan and Terry McDermott to thrive.

Yet Smith was not just a clogger, he could also play and scored 48 goals on his way to winning nine major trophies in total.

He was sent off just once in his top-flight career, and it was actually his mouth rather than his studs that got him into trouble after he swore at referee Clive Thomas in a match at Manchester City.

In 1973 he became the first Liverpool skipper to lift a European trophy, the UEFA Cup, but just a few months later Smith was dropped and stripped of the captaincy in favour of Emlyn Hughes, a man of whom his dislike was no secret.

So desperately sorry to hear of the passing of Tommy Smith a real legend of the club. Honoured to play with him. Great captain and leader of men thoughts are with family and friends #YNWA— Ray Clemence (@RayClem1) April 12, 2019

With his Anfield career seemingly winding down, Smith had a spell on loan with Tampa Bay Rowdies in 1976.

Yet upon his return destiny was to hand Smith arguably his finest hour when an injury to Phil Thompson paved the way for him to play in the 1977 European showpiece and score with a towering header, on that famous night in Rome.

Smith left Liverpool in for Swansea, managed by his old Reds team-mate John Toshack, in 1978, and helped them to promotion from the old Third Division. He received the MBE for services to football and retired from playing in 1979.

A brief return to Anfield as youth coach preceded a career as an after-dinner speaker and newspaper columnist, while Smith remained a keen follower of his old side.

His life was not without controversy, however, as former Liverpool team-mate Howard Gayle claimed in 2016 that Smith had made racist comments to him in training during their careers. In an interview with the Guardian on the matter Gayle called Smith a “disappointment” and a “complete let-down”.

Smith would take over the lease of Liverpool’s famous music venue, The Cavern Club, but years of crunching tackles had left him struggling to walk unaided, and Smith suffered a heart attack in 2007 before being diagnosed with Alzheimers and dementia in 2014. His wife Susanne had died from the same condition four years ago aged 71.