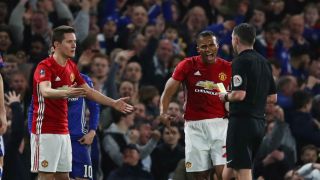 Jose Mourinho's tongue was planted firmly in cheek as he thanked referee Michael Oliver for sending off Ander Herrera in Manchester United's FA Cup defeat to Chelsea this season.

The Red Devils secured their place in the Europa League final via an ugly 1-1 draw against Celta Vigo at Old Trafford, which was enough for a 2-1 aggregate victory.

It gives United the chance for a second trophy this term having already collected the EFL Cup, while Mourinho's men have also been locked in a battle for fourth place in the Premier League.

The United manager has made no secret of his despair at United's injury problems this season, with the likes of Luke Shaw, Chris Smalling and Phil Jones coming in for criticism from the Portuguese, amid a hectic domestic and European schedule.

United could have been playing even more matches had they not succumbed to a 1-0 defeat at Stamford Bridge in the FA Cup quarter-finals – a game that saw Herrera dismissed in the 35th minute.

And, when assessing United's chances in the Europa League final against Ajax, Mourinho was keen to offer his thanks to Oliver, who was the official at Stamford Bridge.

"They [Ajax] will have 12 days to prepare for the final and we will have three matches in the Premier League to play with a group of 15-16 players after a crazy season with so many matches," he said.

"We have played so many matches because we progressed to two finals and the last 16 in the FA Cup.

"I have to say thank you to Michael Oliver for that red card to Ander Herrera because we couldn’t survive going further in the FA Cup. So let's try to prepare the team as best we can."