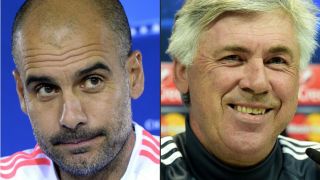 Arjen Robben insists it is too early to make comparisons between Bayern Munich coach Carlo Ancelotti and predecessor Pep Guardiola.

Ancelotti started work a week ago after Guardiola's departure for Manchester City and is charged with building on the good work undertaken by the Spaniard, who guided Bayern to three consecutive Bundesliga titles.

Former Real Madrid boss Ancelotti is a decorated coach in his own right, having won three Champions League crowns to Guardiola's two, but Robben says the Italian's tactical approach will take time to come to the fore.

"It's too early now [to know how the two coaches compare]," he told Goal.com. "We all have to get started first.

"We didn't work tactically a lot in the first training sessions. But we will see in the coming weeks and when the games start. I'm looking forward to it.

"He needs time and you have to get to know each other first. He is a world-class coach and, for the players, it is something really special to be able to work with so many good coaches. This can only be an advantage for us."

Guardiola's only real shortcoming as Bayern coach was that he failed to deliver European glory, with Jupp Heynckes having guided the Bavarians to Champions League success the season prior to the former Barcelona boss' arrival.

But Robben insists Bayern's ambitions will be the same as they are ahead of every campaign.

"Basically it is every year the same," he explained. "There are many good teams in the Champions League but we have to focus on our own strengths.

"We have a very strong squad and our goal is the same - we want to reach the Champions League final. But that is very, very difficult.

"But I guess we can be proud that we are able to set that high goal, that we can say and are allowed to say that we want to reach the Champions League final. That's not the case for every club and that is very positive.

"But of course it does not mean that our goal will become automatically true."

Robben will miss the start of Bayern's Bundesliga season after suffering a groin injury in the club's first friendly match of the new campaign against Lippstadt, ruling him out for six weeks.