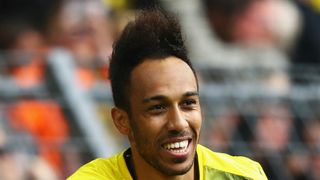 Pierre-Emerick Aubameyang was delighted to claim the Torjagerkanone after scoring a brace in Borussia Dortmund's thrilling 4-3 Bundesliga win against Werder Bremen on Saturday.

Aubameyang began the final day of the season a goal behind leader Robert Lewandowski but, with the Bayern man drawing a blank in a 4-1 win at home to Freiburg, he took full advantage.

The Gabon international put Dortmund 2-1 up at Signal Iduna Park with a spectacular volley from Ousmane Dembele's chipped pass, then converted a late penalty to seal the points for Dortmund.

Aubameyang thanked his teammates for their help in ensuring his total of 31 league goals was more than any other striker in the Bundesliga this season.

"The Torjagerkanone means a lot to me," Aubameyang said. "It was a great effort - made by the whole team.

"I am grateful to everybody: the training staff, my fellow players and everybody who works for the club. It is just great."

Aubameyang's haul also equalled the club record for league goals in a single season set by Lothar Emmerich, who lifted the Torjagerkanone for Dortmund in the 1965/66 and 1966/67 seasons.

Victory ensured Dortmund finished third in the final Bundesliga table, behind champions Bayern and RB Leipzig, with goalkeeper Roman Burki relieved to have booked automatic qualification into the group stage of the Champions League.

"We are really pleased with the win," Burki said. "It is extremely important that we play in the Champions League, not only so that we can keep players here, but also to be able to attract potential new signings.

"We achieved our target. If you want to be a top team, then you have got to win your home games. We have not lost at home for two years. That is pretty impressive."