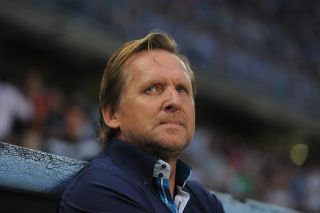 A 2-0 win over Villarreal on Monday lifted Malaga to 10th in the table, increasing the likelihood of Schuster remaining at the club.

The German signed a five-year deal in June 2013, but revealed after the win over Villarreal that only a top-half finish would guarantee his stay.

"It depends on our position in La Liga, if it's automatically renewed," Schuster told Cuatro.

A run of four wins in their last six league outings has given Schuster hope, but the 54-year-old said the whole season would be analysed before a decision on his future is made.

"It's not a matter of whether I deserve to (stay) or not," he added.

"We have to take account of everything at the end of the season, we have to analyse perfectly how the season has gone, how we've done things.

"If it were that simple, there wouldn't be an issue, but we have this clause there and we'll have to see what happens.

"Our work has to be evaluated and I'm not just here to be a pretty face."