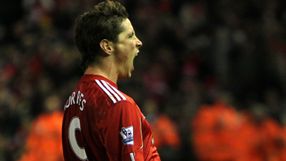 The Spain striker, whose miserable form had mirrored his club's, left the pitch to a standing ovation as a packed Anfield belted out their favourite Torres songs in honour of his two stunning first-half goals.

His battered confidence visibly soared as the game went on and he chased lost causes, trying to ram himself past four defenders in search of his hat-trick with a self-belief he had lacked for months.

Torres doubled his tally of league goals this season and seemed to have finally shaken off the niggling injuries which hampered him during Spain's victorious World Cup campaign.

"People will say he is back to his best and we hope that is the case," manager Roy Hodgson told a news conference.

"He has taken more than his fair share of criticism, today he will get a lot of plaudits."

Torres was slightly less certain about whether he had rediscovered the form which earned him 22 goals last season.

"It's been difficult for me with injuries but I am training every day and every day feeling better and improving," he said.

"I don't know if I can play my best soon -- but I will as soon as possible. I know the expectation I have but I can handle that."

He opened the scoring in the 11th minute with a superb finish following a sublime pass from Dirk Kuyt, whose return after a month out with an ankle injury improved Liverpool's creativity.

Torres also curled a wonderful shot into the far corner after Raul Meireles snatched the ball off Ashley Cole and lofted the ball forward to the Spaniard, who lived up to his reputation as a thorn in Chelsea's side with a seventh goal in eight games against the Londoners.

Liverpool, who have climbed out of the relegation zone to ninth place after three successive wins, dominated midfield in the opening exchanges with Lucas sparking several charges forward and Maxi Rodriguez looking threatening.

In a more defensive second half, they had keeper Pepe Reina to thank for two wonderful saves, first from Florent Malouda and when he turned Nicolas Anelka's fierce shot on to the bar.

After consecutive league victories over Blackburn Rovers and Bolton Wanderers and a 3-1 Europa League win over Napoli, talk around Anfield had been of a revival but what they needed was a validation of that with a defeat of a high-profile team.

It does not come bigger than the champions and league leaders, not that Hodgson was getting carried away.

When asked about the ups and dow