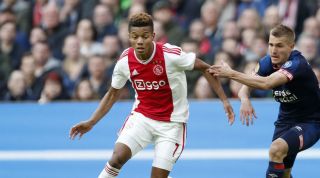 Neres has played a key role in Ajax’s excellent run in the Champions League this season, and his skilful contributions aren’t going unnoticed.

Spurs are now one of five clubs interested in the 22-year-old, with Milan, Borussia Dortmund, PSG and now Bayern Munich also in the chase, according to Calcio Mercato.

Neres was bought by Ajax for just €12m from Brazilian outfit Sao Paulo. However, with the increased interest, he could now fetch a whopping €50m.

But the price tag doesn’t seem to have put Spurs off, as they reportedly had scouts watching Neres earlier this week in the match between Ajax and PSV.

The tricky winger has scored 11 goals and assisted 14 more in all competitions so far this season.

The 20 highest-paid footballers in the world have been revealed – but is Messi or Ronaldo top?