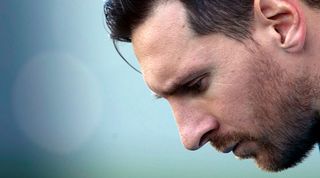 The top-paid players in the world in 2019 have been revealed by France Football magazine.

The new list sees the return of that longstanding Leo Messi vs Cristiano Ronaldo rivalry, with the two unsurprisingly taking up the top two spots on this list.

Ronaldo, who secured a lucrative move to Juventus last year, now has an annual income of around £97 million – but even that's eclipsed by the £112 million Messi rakes in each year.

Both players have been handed hefty fines for tax evasion in the last couple of years, with Ronaldo’s recent €18.8 million penalty the larger of the two.

Five of the top 20 players ply their trade in the Premier League, although two – Manchester United’s Alexis Sanchez (9th) and Arsenal midfielder Mesut Ozil (13th) – are struggling to get much playing time this season, and may move on this summer. Manchester City duo Sergio Aguero (16th) and Kevin De Bruyne (17th) make the list, while Manchester United’s Paul Pogba also features at No.19.

Only one British player makes it into the top 20: Wales’s Gareth Bale (5th), who plays for Real Madrid. Two other Madrid players, Toni Kroos (12th) and Sergio Ramos (20th), make the cut, although Bale and Kroos have been linked with moves away.

Real’s rivals Barcelona are a commanding presence in the top 20. As well as Messi, the club features three other players: Philippe Coutinho (8th), Luis Suarez (10th) and Gerard Pique (11th). Again, Coutinho is likely to be finding a new club come the end of this season.

The appearance of two Chinese clubs, Shanghai SIPG and Hebei China Fortune, points to the continued determination of the Asian nation to establish itself as a global footballing superpower. The two clubs have been on the list for a number of years now – showing that China’s forays into European markets are unlikely end soon.

QUIZ Can you name the 50 players with the most Premier League appearances for Manchester United?

A notable omission from the list is Bayern Munich, who have previously been a mainstay. The German club had a difficult start to the season, were recently knocked out of the Champions League by Liverpool, and have an ageing squad. Should they put focus on rebuilding this summer, they could re-enter the chart next year.

You can see the top 20 highest paid players, and their annual income, below:

QUALITY FOR A QUID

Subscribe to FourFourTwo and get the first five issues for just a fiver!