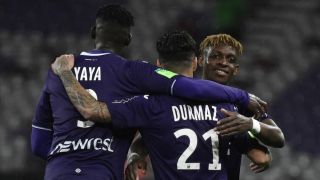 Toulouse confirmed their stay in Ligue 1 on Sunday as a 1-0 win over Ajaccio secured a 4-0 aggregate triumph in their relegation play-off tie.

Jimmy Durmaz struck in the 88th minute to seal a second-leg victory and ensure a 15th successive season in France's top flight for Mickael Debeve's side.

A 3-0 defeat in the first leg on Wednesday left Ajaccio with a mountain to climb and they looked unlikely to spring a shock at Stadium Municipal, mustering only one shot on target in the match.

The game appeared set to finish goalless until Durmaz collected Corentin Jean's short corner in the penalty area, cut onto his left foot and rifled the ball high into the net.

Ajaccio, who finished five points outside the automatic promotion places, must now prepare for a fifth season in Ligue 2 since their relegation in 2014.