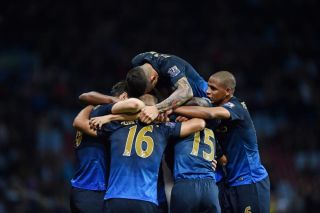 The Premier League champions stumbled in the UEFA Champions League once more with a lacklustre 1-1 draw at home to Roma in midweek and were in danger of dropping further points in their title defence as an eventful Villa Park contest remained goalless heading into the closing minutes.

But the towering Ivorian picked the ideal moment to score his first goal of the season, picking out the bottom corner with a 82nd-minute strike.

"I think today was a great win because we played against a great team," Toure told Sky Sports.

"In the first half it was quite difficult for us but in the second half we did the job. It's a fantastic win.

"After the draw against Roma on Tuesday it was quite difficult for us to come back.

"Full credit to Aston Villa, they played very well in defence but in the second half we did the job."

Toure has been the subject of no little criticism, having followed a summer of uncertainty regarding his future at the Etihad Stadium with a string of below-par displays.

But the former Barcelona man accepts that such scrutiny is part of the job description at a club in the hunt for major honours.

He added: "For me, I'm keeping going. I've been playing for top sides in Europe and I knew about this criticism. I just do my best and try to help the team win again.

"It's not so easy because you have to play every three days and people have to understand I'm not a machine; I am a man. But I have to keep going because all my team-mates keeps going around me."