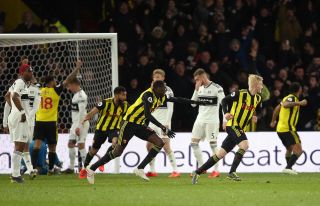 Fulham have been relegated from the Premier League following a 4-1 defeat at Watford on Tuesday evening.

Fulham broke their transfer record three times in spending over £100million last summer, but of their permanent buys only Aleksandar Mitrovic could be considered a relative success. Jean Michael Seri and Andre Frank Zambo Anguissa, who cost around £55m between them, have been huge disappointments.

Manager Slavisa Jokanovic stuck with the style of play which got Fulham promoted, but the players could not implement it in the top flight. The Serbian remained popular with the fans but was sacked in November with Fulham bottom of the table after conceding 31 goals in 12 games. However, at the time Fulham were just three points from safety.

Ran out of ideas

Claudio Ranieri was brought in to replace Jokanovic and attempt to shore up the defence. Ultimately the Italian, a title winner with Leicester, failed as their rearguard remained comfortably the worst in the top flight despite his defensive mindset. Ranieri’s unwillingness to use previously key men such as captain Tom Cairney and full-back Ryan Sessegnon also frustrated supporters and he was sacked in February.

Ranieri said he wanted “kill” Aboubakar Kamara after he snatched the ball from Mitrovic to take a penalty, and then missed, against Huddersfield. Off the pitch the malaise continued with the forward rowing with Mitrovic in a yoga session and getting arrested on suspicion of actual bodily harm and criminal damage after reports of a fight at Fulham’s training ground. He was farmed out to Yeni Malatyaspor in January.

No case for the defence

The simple fact is Fulham could not defend. Like a mullet hairstyle, they looked tidy up top but a mess at the back. They have conceded 76 goals in 33 matches, comfortably the worst record in the top flight, with neither Jokanovic, Ranieri or caretaker boss Scott Parker able to arrest the flow of goals which has ultimately cost them.