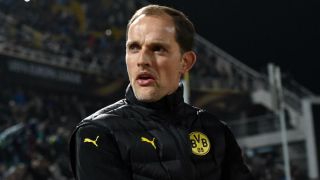 Borussia Dortmund coach Thomas Tuchel will not obsess over Bayern Munich's form as the Bundesliga returns from the mid-season break.

Champions Bayern hold an eight-point advantage over second-placed Dortmund at the halfway stage, with action resuming this weekend.

Bayern travel to Hamburg while Tuchel's men visit Borussia Monchengladbach, but the Dortmund boss is keen to dismiss the relevance of all pre-Christmas form to the battles ahead.

"We played a very good first half term and we received a lot of praise for that, but we have to disregard that now," he told his pre-match news conference on Friday.

"Bayern have a comfortable lead, it's not our concern whether they will keep their level.

"I don't want my team to put itself too much under pressure. We have to have an open mind to exploit all our possibilities."

Dortmund have been strongly linked to a January move for Mainz's Yunus Malli and Christian Heidel, the sporting director of their Bundesliga counterparts, has confirmed interest but insists the attacking midfielder will feature against Ingolstadt this weekend.

Tuchel, who coached Mainz between 2009 and 2014, was keen to avoid further fuelling transfer talk.

"The full focus is on the current squad," he said. "Mainz manager Christian Heidel said everything there is to say. Patience is required."

A Henrikh Mkhitaryan brace helped Dortmund to a 4-0 win over Monchengladbach in August but Tuchel believes his team will face a different challenge against a team whose fortunes have transformed since Andre Schubert replaced Lucien Farve as head coach a month later.

"Schubert's Gladbach are more aggressive, they defend higher up the field," he added. "They play less passive than under Favre."