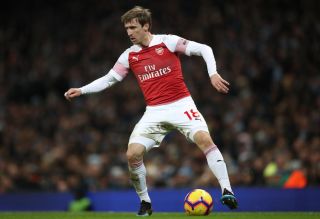 NachoMonreal‘s future at Arsenal is in question, with La Liga side Real Sociedad thinking they are close to a deal, reports the Daily Mirror. The 33-year-old has been offered a two-year contract by Sociedad, and the Spanish left-back may be tempted to return to his homeland as the Gunners now have two other left-backs – Kieran Tierney and Sead Kolasinac – on their books.

Doubt still remains over the future of Spurs playmaker ChristianEriksen, with the Daily Mail reporting that neither Real Madrid nor Barcelona have made offers for the Dane. The Daily Mirror reports he has been left in limbo following a contract stand-off with Tottenham.

Chelsea are looking to put off any potential bidders for striker TammyAbraham by offering the 21-year-old a new contract which would double his current £50,000-a-week wages, the Telegraph says.

Manchester United midfielder NemanjaMatic is looking to discuss his future at Old Trafford after the Serbia international lost his first-team place under Ole Gunnar Solskjaer, reports the Daily Mirror. A number of European clubs could be interested in the 31-year-old, the paper adds.

Meanwhile, Alexis Sanchez‘s potential move away from United may grind to a halt. The club want to discover the extent of the injury suffered by Anthony Martial before allowing the Chile international to join Inter Milan on loan, reports the Guardian.

Paris is calling  @FCBarcelona will be in the French capital on Tuesday— MARCA in English (@MARCAinENGLISH) August 26, 2019

Pione Sisto: The Denmark winger, who was in talks with Aston Villa, is set to move from Celta Vigo to Torino, according to Marca.

Andre Ayew: The Swansea man is wanted by Sampdoria, with the Italian side looking to bring the 29-year-old in on loan, reports the Daily Star.

Bobby Duncan: The 18-year-old Liverpool striker is still in the sights of Fiorentina and Danish side Nordsjaelland, the Liverpool Echo says.

NEWS Bolton on verge of liquidation as EFL deadline looms

FEATURE What the hell happened to Alexis Sanchez? How the fireball footballer extinguished over time