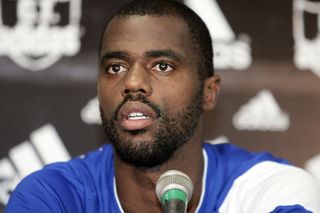 Cosmin Olaroiu's side have now won four from four, but might have been expecting an easier ride against an Al Shaab side who are yet to register a league point.

It took until the 55th minute for former Brazil striker Grafite to break the deadlock and Al Shaab remained in the game right up until stoppage time, when right-back Essa Mohammed received his marching orders for a second bookable offence.

Al Ain recovered from their 4-3 defeat at Al Dhafra with a 5-2 demolition of Dubai, Asamoah Gyan netting a hat-trick to follow up on his brace for Ghana in midweek.

The hosts took the lead early on through central defender Ismail Ahmed and went in 1-0 up at the break, but Rami Yaslam equalised for Dubai shortly after half-time.

Al Ain re-took the lead almost immediately through Gyan, before Michel Bastos provided the assist for his second.

Malian stiker Dramane Traore was introduced as Dubai searched for a way back into the match and he managed to get a goal back on 68 minutes.

But within two minutes Australian Alex Brosque had replied to seal the points for Al Ain, before Gyan got his hat-trick goal to complete the rout.

Al Sharjah suffered their second defeat of the season as they went down 3-0 at home to Al Dhafra.

Al Dhafra scored three goals in a frantic seven-minute spell in the second half, Ghanaian international Emmanuel Clottey being joined on the scoresheet by Makhete Diop and Kamel Chafni.

In the day's other game, Bani Yas maintained their unbeaten record as they drew 1-1 at home to Al Wahda.

Hamdan Al Kamali opened the scoring for Al Wahda but the hosts equalised late on with a goal from former Racing Club striker Luis Farina.