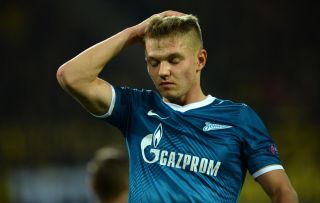 Those feeling most secure heading into the second legs will be Zenit and Porto, who claimed 1-0 wins at Standard Liege and Lille respectively.

Andre Villas-Boas' Zenit took the initiative in their tie thanks to Oleg Shatov's 16th-minute goal, courtesy of an assist from Brazil international Hulk.

Porto, meanwhile, were grateful to Hector Herrera's winner just after the hour mark in France, which gave them a slender one-goal advantage to take into next week's return leg at Estadio Do Dragao.

The other three games to take place on Wednesday all finished 1-1, with Celtic among those to claim a precious away goal.

The Scottish champions are only participating in the play-off round after they were reinstated by UEFA following Legia Warsaw's sanction for fielding an ineligible player at the third qualifying stage.

And Ronny Deila's men will be satisfied with a draw against Slovenian champions Maribor.

McGregor's strike arrived in the sixth minute but their advantage was wiped out before the quarter-hour mark as Damjan Bohar slotted home.

In Denmark, AaB took a 16th-minute lead through Nikolaj Thomsen, only for Vinicius to hit back for APOEL to ensure the visitors return to Cyprus in the ascendancy.

Elsewhere, Slovan Bratislava needed a late Robert Vittek strike 10 minutes from time to earn a 1-1 draw at home to BATE, after Tomas Jablonsky had put through his own net in the 44th minute.