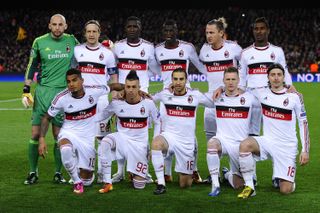 Seven-time champions Milan enter at the play-off stage after a late win in the final game of Serie A last season ensured they finished third.

They will face former European champions PSV at the Philips Stadion and retired midfielder Mark van Bommel, who played for both clubs, believes the tie is too close to call.

"It will be a very difficult game for both teams," the former Netherlands international told Milan's official website.

"PSV have changed a lot, they have a lot of young players and they are a very quick team. Milan don't know how PSV play, they all run a lot, but Milan are still Milan, they have lots of talent."

Arsenal travel to Fenerbahce having only secured their qualification for the competition in the final game of last season's Premier League thanks to a win against Newcastle United.

Arsene Wenger's men face a tough tie against a team that reached the last four of the UEFA Europa League in 2012-13, with both sides having lost in their domestic openers on Saturday.

While Ersun Yanal's men threw away a two-goal lead to lose against Konyaspor, the English side were beaten 3-1 at home by Aston Villa and midfielder Jack Wilshere wants to bounce back against the Turkish club.

"Villa are a tough team but we are not happy with our performance. We have to look at ourselves and pick ourselves up for the (Champions League) qualifier in the week," he told the club's official website.

Scottish champions Celtic travel to Shakhter, having beating Cliftonville and Elfsborg in previous rounds, and they will look to repeat their performance in the competition last year.

Neil Lennon's men qualified from the group stage, beating Barcelona in the process, before bowing out to Juventus in the round of 16.

Lyon continue their quest to qualify for the group stage after missing last season's competition against Real Sociedad, while German side Schalke get their campaign under way against PAOK.

Jens Keller's men had been due to play Metalist Kharkiv but will instead come up against the Greek side with Kharkiv banned from UEFA competitions due to alleged links with match-fixing.

Swiss side Basel will look to go one better than last season and qualify for the group stage against Bulgaria's Ludogorets on the same day as Dinamo Zagreb face Austria Wien for the first time in the Croatian capital.