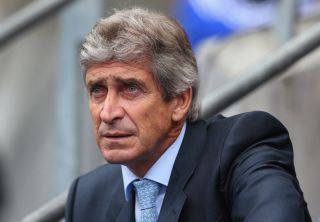 City’s two previous ventures into Europe's elite club competition saw them crash out in the group stages, as they finished third in their group in 2011-12 before ending the first round at the bottom of the table last season - largely thanks to their wretched away record that saw them fail to pick up a single point on the road.

The Premier League club also lost their domestic crown to arch-rivals Manchester United last term, with dual league and European failure - combined with an FA Cup final loss to Wigan - proving to be the final straw for boss Roberto Mancini, who was replaced in the dugout by Malaga coach Manuel Pellegrini during the close-season.

City wasted no time in getting behind their new manager, as Sevilla duo Jesus Navas and Alvaro Negredo swiftly arrived, with Fernandinho, Stevan Jovetic and Martin Demichelis also bolstering their side.

That gives City a squad with plenty of flair and experience to call on as Pellegrini targets the European improvement that the club's fans, and their owners, so desperately crave.

His side have hardly enjoyed ideal preparation for their first foray into Europe this season, after being held to a 0-0 draw by Stoke on Saturday.

The Chilean opted to shuffle his pack for the Premier League encounter, with one eye on Tuesday's clash, but he remains confident that whatever side he chooses can deliver.

"I have trust in the squad," he said. "I don’t think you must expect us to win every match, of course we want to but it's impossible to do it.

"I will not always be happy to draw away but for (the match against Stoke) it is a good draw."

After resting several of his stars at the Britannia Stadium, Pellegrini is likely to return to a more familiar line-up against Plzen, with Sergio Aguero, Navas and Fernandinho all in line to play from the start.

And he could also be boosted by the return of captain Vincent Kompany, who has been battling a groin problem.

"We'll see Sunday and Monday if Vincent can play next Tuesday in the Champions League, but sure he will arrive to the derby (against Manchester United next weekend)," Pellegrini added.

For their part, Plzen head into the competition in superb form, having won all six of their qualifying matches.

They also top their domestic league table after an unbeaten start consisting of six victories and two draws.

Their only other group stage appearance came in 2011-12, when they finished a creditable third in a group containing Barcelona, Milan and BATE Borisov.

They will also draw some confidence from their performance in last year’s UEFA Europa League, as they finished above Atletico Madrid in the first phase and dealt with Napoli before being knocked out by Fenerbahce 2-1 on aggregate in the last 16.

The hosts - who will likely look to top scorer in qualifying Marian Cisovsky to provide their goal threat - will undoubtedly start as underdogs.

However, with City picking up just the one away win in six in the Champions League to date, coupled with the fact that Plzen have only failed to triumph in one of their previous 11 home matches in Europe, they will retain some hope of an upset.