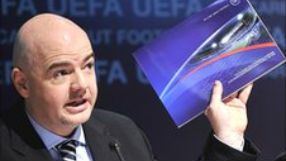 With the financial fair play rules to be introduced by European football's governing body yet to bite, clubs could chalk up much bigger losses than the 1.2 billion euros of 2009, Traverso told Reuters.

"We are now collecting figures for 2010... we have noticed the situation has become worse... in all the major leagues," he said in an interview on the sidelines of the Soccerex European business forum.

"For the time being, it's a little bit soon, but the chances are the losses might increase by 50 percent."

UEFA approved the new financial rules last year and some of the regulations will come into force later in 2011 as it hopes to curb reckless spending by clubs and encourage them to live within their means.

"The 2010 accounts refer to a period when the financial fair play rules were not approved so I think the impact of the rules will be seen from next year," said Traverso.

From 1 June clubs will be banned from owing money to other clubs, players, tax and social security departments while the break-even requirement, which stops clubs from spending more than their generated revenues, kicks in from 2013/14.

High wages and transfer fees are among the main causes of overspending and while the rules are unlikely to dent the top players' earnings or fees, they could lower the averages.

"The regulations will act like a salary cap. In general clubs will need to cut wages," Traverso said.

"This might have some affect when it comes to the distribution of talent because players might become more affordable for more clubs and therefore there might be a better mix of players between the various teams. This could be one of the positive effects of the rule.

UEFA wants clubs to invest in youth development and infrastructure to create longer-term sustainability and will impose sanctions on those who break the rules.

At a discussion panel earlier in the day Traverso brushed aside concerns rich club owners could simply write a big cheque attributed to costs, such as a new stand or other facilities, to help balance the books.

He said UEFA would employ specialists to monitor such deals to ensure they correspond to market value.

"The sanctions will be applied in a progressive and proportionate way," Traverso said. "Sanctions might go from a simple warning, to a fine, to the withdrawal of prize money, to being kicked out from the competitions."

Clubs have widely welcomed the fair play rules but Liverpool managing director Ian Ayre said the key to success would be strict implementation.

"These rules should be... hard and fast rules," he told the panel.

"What will kill the initi