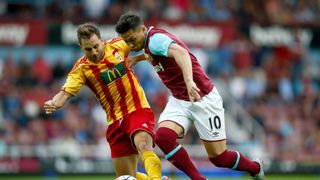 West Ham, Copenhagen and Rosenborg were all nervy first-leg winners in the second round of UEFA Europa League qualifying on Thursday.

Slaven Bilic was taking charge of West Ham at Upton Park for the first time in a competitive match, but he had to wait for James Tomkins' 90th-minute winner to celebrate a goal against Maltese minnows Birkirkara.

Visiting goalkeeper Justin Haber had enjoyed a fine evening, before flapping at a Mauro Zarate corner in the closing stages to allow Tomkins to nod home from close range.

Copenhagen are in a strong position heading into the second leg against Welsh side Newtown, but would perhaps have expected more than the 2-0 scoreline they produced at Parken Stadium.

Benjamin Verbic nodded home a second-minute opener, and Kasper Kusk gave the Danish side a two-goal cushion when he lashed home on the counter-attack in the 74th minute.

Rosenborg will head back to Norway with a 1-0 lead against Icelandic outfit KR, but they needed a 56th-minute penalty from Pal Andre Helland to pick up the win.

Zilina and Stromsgodset were 2-1 victors at Dacia and Mlada Boleslav, while Brondby, Mladost and Wolfsberger won 1-0 on the road at Beroe, Kukesi and Shakhtyor, while Jelgava achieved the same result at home to Rabotnicki.

AIK defeated Shirak 2-0, Kairat went one better in a 3-0 triumph at home to Alashkert and Apollon put one foot in the next round with a 4-0 rout of Trakai.

The matches between Hapoel Be'er Sheva and Thun, and Cherno More and Dinamo Minsk both finished 1-1, Skonto were held 2-2 at home to Debrecen, and Elfsborg could only draw 0-0 at Randers.

Zoran Nizic's 90th-minute goal handed Hajduk Split a lifeline as they went down 3-2 at Koper, but Beitar Jerusalem's hopes appear all but over after they suffered a 5-1 battering at Sporting Charleroi - the visitors finishing the match with nine men.

There were 1-0 home wins for Trabzonspor, Slovan Bratislava, Cukaricki and Legia Warsaw against Differdange, University College Dublin, Qabala and Botosani respectively, while Zeljeznicar and Astra won by the same scoreline away at Ferencvaros and Europa League debutants Inverness Caledonian Thistle.

Rounding off the action, Inter Baku won 2-1 at FH, while the matches between Slask Wroclaw and IFK Gothenburg, and Jagiellonia Bialystok and Omonia Nicosia ended in 0-0 draws.