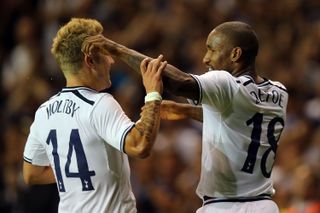 Two first-half strikes from Jermain Defoe ended all hope of a miraculous comeback from the Georgian visitors, before Lewis Holtby wrapped things up midway through the second period with a controlled effort from distance.

And the London club will now take their place in the group stages of the Europa League for the third consecutive season, as they look to build on last year's quarter-final appearance.

Andre Villas-Boas handed a first start of the season to Defoe up top as Sandro made his maiden appearance in a much-changed starting line-up since suffering a knee injury in January. The visitors, meanwhile, made three changes from the first leg, with Levan Khmaladze, Dorin Goga and Vouho coming in for Darko Glisic, Jaba Dvali and Xisco.

It did not take long for Defoe to make his mark on the match, with the Englishman firing narrowly wide in the 12th minute, while Sandro also reintroduced himself to the home fans with a trademark crunching tackle that brought him a yellow card soon after. However, the hosts took some time to get going at White Hart Lane even after those flashpoints, with their comfortable first-leg lead possibly the catalyst for their lacklustre showing.

Tottenham were desperately struggling for inspiration, but their quest to break the deadlock was not helped by some bizarre officiating on the half-hour. Jermain Defoe was undoubtedly goalbound as he dribbled into the box but was penalised for handball despite replays showing the ball had in fact hit the outstretched arm of an opposition defender.

But the diminutive striker would have his moment before the half was out, as he latched onto a Holtby pass before shifting the ball away from Giorgi Gvelesiani and smashing home from the edge of the box with his left foot. And with seconds remaining in the first period, he would repeat the trick to double his side's advantage, finishing from close range after Gylfi Sigurdsson had jinked into the box brilliantly.

With Sunday’s north London derby clash with Arsenal in the Premier League undoubtedly in mind, Villas-Boas elected to replace Andros Townsend with young striker Harry Kane at half-time. The change had no effect on the hosts' control of the game, with Sigurdsson hitting the side netting from distance before Spurs also moved to protect Kyle Walker by replacing him with Ezekiel Fryers.

Sigurdsson came even closer to getting the goal his performance deserved with an hour on the clock, but could only strike the underside of the bar with a driven effort from 18 yards out. However, Holtby would find more luck than his team-mate soon after, as he hit the same part of the woodwork with a right-footed drive only for the ball to come down inside the net to put the home side 3-0 up.

The hosts enjoyed lengthy spells of comfortable possession in the closing moments of the game, with the only blot on their copybook coming in the final minute as Defoe received a yellow card for a dive in the Tbilisi area.