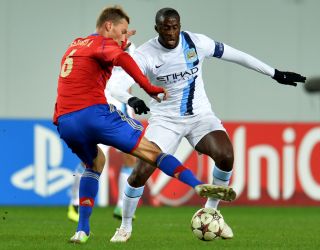 Manchester City earned a 2-1 win over the Russian club in the UEFA Champions League on Wednesday, with two goals from Sergio Aguero giving them the points.

However, the result was overshadowed as sections of the home support were alleged to have targeted City midfielder Toure during the clash at the Arena Khimki.

Toure confirmed after the match that he had reported the taunts to referee Ovidiu Hategan, and expressed his desire for UEFA to punish CSKA for the behaviour of their fans.

City had also been expected to make an official complaint to the European governing body regarding the conduct of the home side's followers.

But UEFA has insisted it will examine the report from Hategan before opting whether to take further action.

"We are still waiting for the reports, once we get them then we will decide whether to investigate," a UEFA spokesperson told Perform.

Anti-racism campaigners Kick It Out have been among those to condemn the actions of the supporters in question, advocating a partial stadium ban as punishment for the alleged offences.