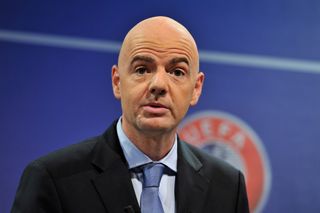 European football's governing body intend to implement new laws in 2018 that will see clubs required to bring their annual losses below £8.8million.

With the current level of spending in Europe, it had been feared that a lot of clubs would not be able to adhere to the rules, however, there are acceptable levels of losses UEFA will allow before the assessment takes place.

If clubs are unable to meet the set requirements they could face bans from European competition - and Infantino insisted that all clubs would be treated the same.

"Big clubs as well as small clubs, the rules are there," he told BBC Radio 5 Live.

"A year ago, we warned that this is the last wake-up call for the clubs and that the rules have teeth. The break-even rule will enter into force next season, taking into account the figures of this season and last season.

"The clubs know the rules. If they haven't generated enough revenue to perform these transfers, then there will be sanctions - sanctions which could be a warning or a fine or a restriction on registering new players or, finally, an exclusion.

"The financial fair play rules have been introduced and implemented not to punish clubs but to help the clubs."

And Infantino expressed his desire that the fans were at the heart of any future decisions made by club officials.

"It's important to keep the fans on board," he added. "Fans are the only ones who remain loyal throughout their life to the club.

​"Everybody else sooner or later changes - players, managers, even owners - so a dialogue with fans to find the right balance is a good thing."