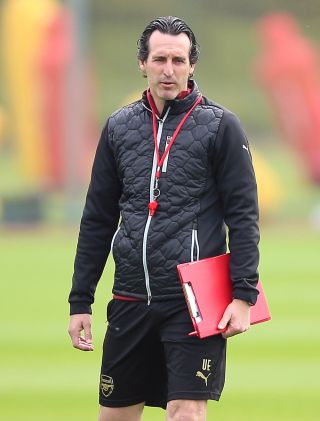 Arsenal head coach Unai Emery gave his players the day off on return from their Europa League semi-final success in Valencia.

The Gunners secured a 4-2 win at the Mestalla to set up a clash with rivals Chelsea in the final in Baku on May 29.

Having been held at home by Brighton last weekend, Emery’s side travel to Burnley for their final game of the Premier League season knowing a top-four finish is realistically out of reach.

They need to win at Turf Moor and hope Champions League finalists Tottenham lose at home to Everton, with an eight-goal swing, to end Emery’s first season in fourth.

Instead, their best chance of securing a Champions League return of their own is to win the Europa League, with Emery admitting some of his stars will need a break this weekend.

“We arrived home at 06:00 (on Friday) and we cancelled training because it’s important to rest,” he told arsenal.com.

“On Saturday, we are going to prepare for Sunday’s match but I am going to decide with the players who are hungry and in good physical condition to play this match.”

Arsenal beat Burnley 3-1 at the Emirates Stadium earlier in the season but were pushed by the Clarets and Emery expects another test this weekend.

“We struggled a lot here against Burnley. I remember this match and I watched it two weeks ago when they drew with Chelsea.

“It was a very tough match against Chelsea and I’m expecting the same on Sunday in Burnley.

“We are going to play with the idea of imposing our gameplan, our capacity and our team against them.

“We know it’s going to be a difficult match with long balls, second actions and set-pieces, so we need to defend well in these situations.”