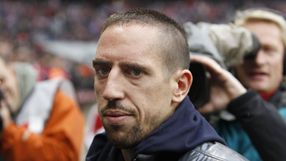 Ribery, who earlier this year signed a contract extension with the Bavarians until 2015, said he was very disappointed to hear the comments and suggested the coach should have spoken to him directly.

"I give it all I have and do everything to be fit again," Ribery told Germany's Sky television in an interview to be broadcast later on Tuesday. "But if the coach always talks badly about you, if he keeps dragging you down then it becomes difficult.

"I was very disappointed to see his comments in the media. I would prefer for him to say it to me directly."

Van Gaal has been under growing pressure following a bad start in the Bundesliga that has left the champions in eighth place, 14 points off the top after 13 games.

"I would like more contact with him so that there is more mutual appreciation," Ribery said of the coach ahead of Bayern's Champions League match at AS Roma later on Tuesday.

"I need to talk with him, have fun. If I do not have that then it cannot work on the pitch."

Ribery, who has played only minor substitute roles in the last two league matches, said he needed more playing time following his recovery from a torn ankle ligament in September.