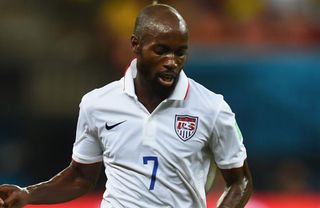 Beasley, the first USA player to have competed at four FIFA World Cups, moves back to MLS after three seasons in Mexico with Puebla.

The 32-year-old winger was signed using the Dynamo's number one MLS allocation ranking, used to determine which MLS club gets first priority to sign a USA national team player re-joining the league after playing abroad.

Houston did not disclose full details of the deal to acquire Beasley, who has 120 caps for his country and started all four games for Jurgen Klinsmann's men at this year's World Cup.

Beasley links up with the Dynamo with the team sitting second bottom in the Western Conference, although they are only five points off the MLS Cup play-offs with 14 games still to play.

And the former PSV, Manchester City and Hannover man is relishing the challenge of playing for a team with two MLS titles to its name.

"I am excited and ready to start this new chapter in my career," Beasley told the Dynamo's official website.

"I have heard great things from [new team-mates] Brad [Davis] and Rico [Clark] about Houston, the team and the fans, and I'm excited to get to know them.

"I feel fit and ready to go and hope [head coach] Dom [Kinnear] will see my work ethic and desire to play at a high level."

Kinnear added: "DaMarcus has had a great career, as we saw at the World Cup. To bring in a player of his quality is a big plus for the team."