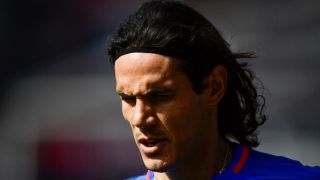 Uruguay striker Edinson Cavani believes the "good feeling" from supporters can encourage the South American nation during the World Cup with Russia.

The two-time champions fell short of their objectives in Brazil four years ago, falling at the Round of 16 stage, but Cavani says the growth shown by Uruguay in the years since has led to optimism.

Uruguay finished second to Brazil in World Cup qualifying and beat Uzbekistan 3-0 in their warm-up clash on Thursday, taking place just one week before their opening game of Group A against Egypt.

Speaking after the win against Uzbekistan, Cavani said confidence is high as they prepare to make their way to Russia.

"People have recognised that over time. I think this good feeling is important because we can feel it from the pitch and sometimes that is what we need to give that little extra in certain moments."

Uruguay have now won three games in a row heading into the World Cup and have lost just once in their previous nine matches.