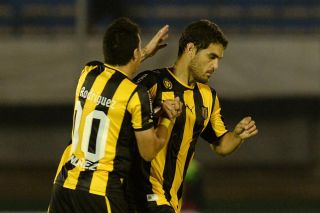 Penarol saw off Fenix thanks to Luis Aguiar's first-half strike at the Estadio Centenario in Montevideo.

Only two points separated the teams before kick-off but the visitors extended that buffer after taking the lead on the stroke of half time.

Aguiar found the back of the net in the second minute of added time for his second goal in as many games, which was enough for victory.

Wanderers, however, are still hot on Penarol's tail after claiming a routine 3-1 win at eighth-placed Rentistas on Sunday.

The visiting side went ahead in the sixth minute courtesy of Mauricio Gomez's thunderous free-kick on the edge of the box at the Complejo Deportivo.

The veteran attacker put the result beyond doubt on 77 minutes via the penalty spot, though Erick Cabaco netted a consolation goal for the home side with one minute of regulation time remaining.

Alfredo Arias' Wanderers have collected 22 points from 11 rounds, one more than third-placed Danubio, who overcame Racing 2-1 in a thrilling match.

As for Rentistas, they drop one position in the table after Defensor Sporting came from two goals down to earn a 3-3 draw at third-bottom El Tanque Sisley.

In other results, former Uruguay international Alvaro Recoba was on the scoresheet as in-form Nacional eased past lowly Cerro Largo 3-0.

Two goals in the final nine minutes from Nestor Silva and Rodrigo Viega lifted Juventud to a 2-0 triumph at home to Liverpool.