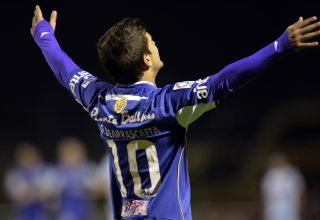 Mauricio Larriera's men trailed from the fourth minute when Giorgian De Arrascaeta put the visitors ahead in Montevideo.

Adrian Luna doubled Defensor's lead before Damian Malrechauffe pulled a goal back for Racing on the stroke of half-time.

But third-placed Defensor dominated the final half-hour as Ernesto Dudok's own goal and strikes from Ignacio Risso, Luna and De Arrascaeta sealed their win.

It marked De Arrascaeta's sixth league goal of the season.

Nacional capitalised by beating Rampla Juniors 2-0 to move top of the table after their fifth consecutive league win.

Gaston Pereiro struck in the 84th minute at the Estadio Centenario before the league's top goalscorer Ivan Alonso netted from the penalty spot to lift Nacional two points clear at the top.

Alonso has eight goals this season.

At the other end of the table, Cerro remain the only winless team after suffering a 3-0 loss at River Plate.

Cristian Techera, Michael Santos and Luis Torrecilla scored for River, who sit sixth after an inconsistent start to the Apertura campaign.

Penarol are still unbeaten but drew for the fourth time in eight games, coming from behind to earn a 1-1 draw at Danubio.

Juventud were too good for El Tanque Sisley in a 3-0 win and Atenas' dominant second half saw them past Fenix 3-0.