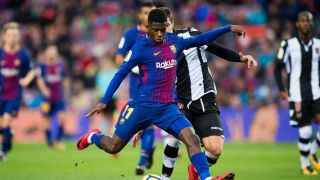 The 20-year-old's dream move quickly took a nightmare turn when he tore his hamstring against Getafe in September, ruling him out for the rest of 2017.

After four comeback appearances this month, three from the bench, Dembele was diagnosed with a fresh hamstring strain following Sunday's thrilling 4-2 comeback win at Real Sociedad.

It means another three to four weeks on the sidelines but, speaking at a news conference ahead of Wednesday's Copa del Rey derby at Espanyol, Valverde insisted there was no benefit to be had from labelling Dembele as an injury-prone player.

"He had a major incident at the beginning of the season and now, possibly, he has a little problem, it's not like [the original injury]," he said.

"We're not going to make it a big deal. If we talk about players who have a problem, they end up believing it. We're going to solve it and help it to be an anecdote."

Valverde explained he initially had no idea Dembele had hurt himself amid the drama at the Anoeta and pointed out it was common for players who have spent a long time on the sidelines to suffer subsidiary setbacks.

"I did not talk to him after the injury," he said. "Watching the game, I saw him finish well, but that's what it is.

"This usually happens when you have been standing still for a long time. It is true that he had played bits of matches and that the idea was that he would be entering little by little.

"It will be the same for when he returns. We hope he is not long out."

Barcelona's attack remains a potent force, something that owes much to Luis Suarez's resurgent form.

The Uruguay striker was short of his best earlier in the season but a brace against Sociedad means he has nine goals in his previous eight outings.

"Luis Suarez is a versatile player who can play in in a lot of different ways but, ultimately. I see him as a classic number nine, a centre-forward," said Valverde, who filled the role himself during his playing days.

"Not in the style of a lanky, large target man - he keeps the ball on the ground - but he scores goals. He is very hard for centre-backs to mark.

"He wasn't scoring many early on in the season but he always gets in goalscoring positions. The goals were always going to come. He just needed more luck.

"We know how things go for strikers. You can score from few chances or have lots of chances and miss then all. That's part of the profession of that position

"For Suarez, it's never just a question of scoring goals. There are the assists he supplies. There is a lot more to him than scoring goals."

Valverde will be without captain Andres Iniesta (calf) when the coach leads Barca against his former club, while new arrivals Philippe Coutinho (thigh) and Yerry Mina remain unavailable.

Colombia centre-back Mina still needs paperwork related to his €11.8million switch from Palmeiras to be completed.