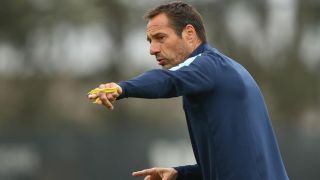 Melbourne City coach John van't Schip has called for greater consistency as his side prepares for a crucial month in the A-League.

City have arguably been the A-League's best entertainers this season, but Van't Schip believes the Melbourne team have some way to go be considered one of the best in the league.

The Dutchman said a high turnover of players in January, in which David Williams, Robbie Koren, Stefan Mauk and Erik Paartalu left to be replaced by Anthony Caceres, Osama Malik, Nick Fitzgerald and Socceroo Alex Wilkinson, had not helped but hoped a settled side would bring greater consistency.

"We play good football in some periods, but it appears we're lacking a bit, especially in defensive areas, that we have to get right," Van't Schip told Omnisport.

"That's something that, with the changes we've had and players coming in and injuries, even though the quality is there to be competing with the best and sometimes even be the best, it's not enough.

"If you want to be the best you have to be consistent and that's what we're working towards with players coming into full fitness, so hopefully the last few weeks we can perform at a high level."

City will need consistency if they are going to get any joy out of a tough March.

Van't Schip and Co. welcome Sydney FC on Saturday, before travelling to second-placed Adelaide United ahead of a home match against third-placed Brisbane Roar.

"We've had some good games, exciting games, but we've had games where we've been flat so we have to get those flat games and get more solid defensive work into the team and then we'll have a good chance. If we don't, we'll struggle.

While Van't Schip is refusing to get ahead of himself, he acknowledges that this is the strongest position City have been in to make a real claim for the A-League title.

"We have to become a more solid team and then we can achieve," he said. "We have the quality, for sure. We've shown that.

"But it's about being there every game at the right time and that's where we have to improve."