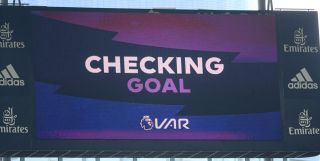 The use – or in some cases non-use – of the VAR system created some major talking points in the Premier League over the weekend. Here, PA looks at some of the controversies.

Can’t believe the decision today to disallow the goal 🤦🏻‍♂️ should’ve came away with a point. We rest up now and go again after the international break #AVFCpic.twitter.com/CxttDD3Wdw— Jack Grealish (@JackGrealish1) August 31, 2019

One of the biggest controversies did not actually involve the VAR, with much frustration around the fact it could not be used to resolve a rumpus at Selhurst Park. Aston Villa’s Henri Lansbury was denied a last-gasp equaliser against Crystal Palace because referee Kevin Friend adjudged Jack Grealish to have dived in the build-up. Villa were furious and the decision has been widely criticised by pundits. To compound matters, Friend’s use of the whistle to stop play after the alleged dive meant that, under current regulations, VAR could not be used to review the goal.

A fortnight ago Manchester City’s Gabriel Jesus was denied a late winner against Tottenham after VAR ruled the ball had struck Aymeric Laporte’s arm before falling to the Brazilian. Even if accidental, under new rules this season, the goal had to be disallowed. Laporte’s handball was missed by the referee at the time and only spotted by an eagle-eyed VAR. Fortunately for Newcastle, their VAR at the weekend was not so vigilant. Replays showed an accidental handball by Isaac Hayden just before Fabian Schar scored the Magpies’ equaliser against Watford at St James’ Park.

Youri Tielemans was on target in Leicester’s victory over Bournemouth but was arguably lucky to stay on the pitch at the King Power Stadium after a bad challenge on Callum Wilson. The Belgian went in late on the Cherries striker, catching him on the ankle. The tackle was reviewed by VAR but Tielemans was not punished.

No penalty for West Ham

Sebastian Haller scored in West Ham’s 2-0 win over Norwich and probably should have had a penalty after being brought down by Tom Trybull. Referee Paul Tierney waved play on and, despite replays showing contact, VAR did not deem it a clear and obvious error.

Norwich boss Daniel Farke also had complaints about VAR at the London Stadium, saying the system did not work well in this game. Farke was angered that Haller was not punished for a heavy tackle on Christoph Zimmerman, who was hurt and consequently unable to prevent a West Ham goal. He also felt Andriy Yarmolenko should have been punished in another incident involving Trybull.