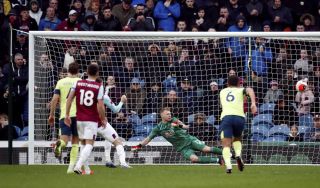 Bournemouth had two goals disallowed by VAR as Burnley won 3-0 at Turf Moor to keep their hopes of a European spot alive.

The Cherries saw Josh King’s first-half effort chalked off for handball against Philip Billing before Matej Vydra scored his second goal in as many games following the break to give the hosts the advantage.

Harry Wilson’s equaliser after a counter-attack was then ruled out by VAR and a penalty to Burnley was awarded instead for Charlie Daniels’ handball.

The win moved Burnley to eighth while Bournemouth remain two points above the drop zone.

Burnley goalkeeper Nick Pope was called into action to deny Callum Wilson, who fired on the turn in an early Cherries chance.

Vydra could have given Burnley the lead after 10 minutes after racing free of the Bournemouth rearguard but Aaron Ramsdale made a fine stop.

Bournemouth thought they had gone in front after 20 minutes when Andrew Surman’s corner was flicked on and King tucked home, but it was ruled out by VAR after the ball came off Billing’s shoulder.

King delivered a sublime cross for Harry Wilson and Pope showed smart reflexes to keep the header out as Bournemouth went close again.

At the other end, Ashley Westwood’s corner five minutes after the break nearly crept in but Surman headed off the line.

But the Clarets did take the lead in the 53rd minute when Vydra darted into the box after beating the offside trap, evaded Simon Francis’ challenge and finished coolly over an onrushing Ramsdale.

Drama ensued before the hour when Bournemouth counter-attacked and scored through Harry Wilson, but VAR brought play back to award Burnley a penalty after Daniels’ handball moments before the Cherries broke forward.

Rodriguez stepped up to slot away an expertly-taken spot-kick to double Burnley’s advantage.

Burnley nearly had a third after a flowing move saw Westwood set up Vydra but the forward stabbed wide.

McNeil fired in a sublime effort which rebounded off the post with Ramsdale beaten, but the Burnley man made no mistake with a brilliant curling 87th minute strike for the third.