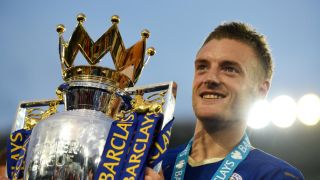 Jamie Vardy has pinpointed Leicester City's 3-1 win at Manchester City as the point he and his team-mates believed winning the Premier League title was a possibility.

Leicester travelled to City as league leaders in February in the middle of a tough run of fixtures that included a 2-0 win over Liverpool, a win over Tottenham and a loss at Arsenal.

At the time many still expected Leicester to drop off the title pace, predicting City would breeze past the unlikely leaders.

Instead, Riyad Mahrez inspired Leicester to a huge 3-1 win - a moment that Vardy recalls as the turning point in the title race.

"No one gave us a chance of winning that day and we dominated them  in their own back yard," Vardy told Sky Sports.

"We have to wait and see until next season if we can do it again.

"We'll just do exactly what we've been doing."

The England international, who was speaking after winning the Football Writers' Association Footballer of the Year award, said the fact the likes of City, Liverpool, Chelsea and Manchester United were set to spend big to try and dethrone Leicester made no difference.

"The money was already in those teams," Vardy said.

"We've turned up and played well, we've played better than them, so why can't it happen again?

"Everyone expected us to get relegated this season. We might have won the league but [coach Claudio Ranieri] will just want us to improve.

"If that's not good enough to win the title again then so be it."

Vardy was also keen to praise Ranieri for not changing too much upon his arrival at King Power Stadium after replacing Nigel Pearson in the off-season.

"Obviously Nigel brought together most of the squad but one thing Claudio said when he came in was that he'd seen us when we had that run [that kept Leicester in the Premier League] last season," he added.

"So he said he didn't want to change much. He just changed little details in training and how we looked at the opposition."