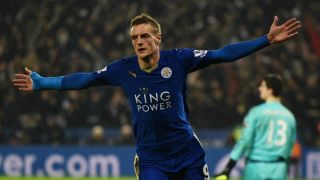 Leicester City forward Jamie Vardy feels a Champions League spot is not beyond his team if they can replicate their performances from the first half of the season.

The England striker has scored 15 goals in 20 Premier League games as Claudio Ranieri's side have defied the odds to sit second.

The Leicester camp have repeatedly stressed that 40 points was their first target, but now that has been achieved Vardy will not rule out taking a seat at Europe's top table.

Speaking to the Leicester Mercury, Vardy said: "You have seen what is going on at this club, it is building in a way they want to be challenging at the top all the time.

"We have reached 40 points. That is what the boss wanted us to achieve first and we have done that now and will see what his next objective is.

"We just want to keep doing as well as we have been doing and take each game as it comes – who knows, if we have another second half of the season like the first we will be there or thereabouts.

"That is how this league has been up to now. It would be brilliant [to finish in the top four] but we will just be doing exactly what we have been doing, which is looking to the next game."

Vardy insists Leicester, who have not been able to score in or win any of their last three Premier League matches, are ignoring suggestions this will be the start of a slide down the table.

"I am sure they said that after we played Liverpool, but we managed to get a point against Manchester City," the 28-year-old added. "We just have to let it go in one ear and out of the other and concentrate on ourselves."