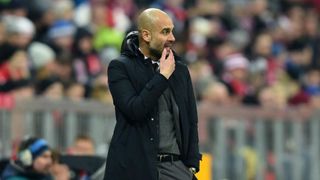 Fitness expert Raymond Verheijen has warned Pep Guardiola he will need to change his approach when he takes over at Manchester City.

Guardiola will leave Bayern Munich for the Premier League at the end of the season having presided over a period of domestic dominance in Germany. Guardiola's men are set to clinch a third Bundesliga title of his three-year spell - their fourth in succession overall - and are also well set to reach the quarter-finals of the Champions League having drawn the away leg of their last-16 tie 2-2 against Juventus.

Dutchman Verheijen, who has advised Barcelona, Chelsea and Manchester City among others on their training methods, believes it would be a mistake to replicate that strategy in the more physically demanding Premier League.

He told Omnisport: "Guardiola's a teacher, he implements a very rigid playing style. That's very good in itself because he's very successful. But he went from Barcelona to Bayern Munich and, before he arrived, Bayern had the best injury record of all the teams in the Champions League.

"Then Guardiola arrived and, in three years, you see the injury record has gone down dramatically. They have one of the worst records in the Bundesliga.

"It has to do with the fact that coaches of the highest level are very demanding during the season, so players are developing a lot of fatigue - not only in matches, but in training - and there is hardly any time to reduce that fatigue between matches.

"That's the main reason why Bayern went from one of the best injury records to one of the worst."

Verheijen believes Liverpool boss Jurgen Klopp and his Manchester United counterpart Louis van Gaal have failed to understand the unique demands of English football and is hoping Guardiola does not make the same mistake.

He added: "He's going to an even more demanding league where players will develop more fatigue in games and will need longer to recover, and the number of games will go up as compared to Bayern.

"It's a very tricky situation, and if he doesn't adjust, he will make the classic mistake that Jurgen Klopp and Louis van Gaal made."